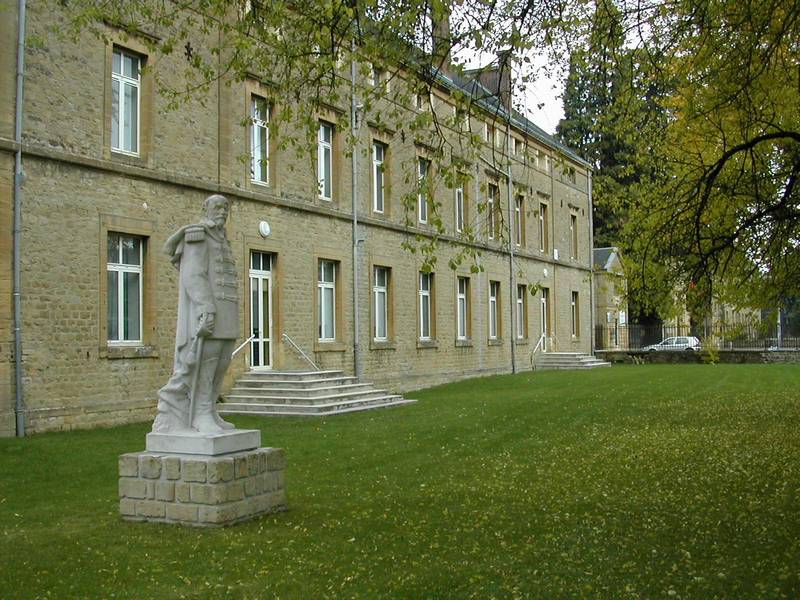 Lycée CHANZY is a French High School located in Charleville-Mézières, the largest town in the Ardennes, a region located in the north-east of France near the Belgian border, within the former larger region of Champagne-Ardennes which has lately become the ‘Grand Est’.

This school has existed since 1876 and is named after Alfred Chanzy, a French general born in the Ardennes.
Chanzy high school is composed of about 750 students with 8 forms of “Secondes” (10th Grade, sophomore year), 7 forms of “Premières” (~11th Grade, junior year) and 8 forms of “Terminales” (12th Grade, senior year).

General studies in our high school.

When the students are in “Secondes”, they are taught the same complsory subjects and they also first have to choose between either “SES” (social and economic studies) or “PFEG” (basics in economics), and again between several different languages or specific school options.

At the end of the 10th grade, the students have to choose between three possibilities, which are a Literature Class (L), an Economic and Social Class (ES) or a Scientific Class (S) for their two final years so as to get ready for their final examination, which is a national exam called the “Baccalauréat Général” (le BAC).

Our high school distinguishes itself from the other schools by its wide range of options and languages, apart from the traditional subjects, such as maths, physics, history, P.E., French, geography…

A traditional schoolday starts at 8 a.m. and finishes at 6 p.m.. The students have a morning break from 9:50 to 10:05, a one or two hour lunch break during which most of the students eat at the cafeteria, and an afternoon break from 15:45 to 16:00.
However, we may have free periods during the day as well.
We go to school on Mondays, Tuesdays, Wednesday mornings, Thursdays and Fridays.

Chanzy also offers several after school clubs:
in the photo club you can learn about photography techniques, share your ideas and pictures (photos.chanzy.net),
in the astronomy club you can use professional equipment to explore the universe,
in the movie club, you can get half-price tickets and watch famous films with other cinema enthusiasts…

Chanzy High School is not only committed to the education of its own students. It is a partner with the UNICEF organization, was involved in Comenius projects with different school partners over Europe, has a school exchange with different schools in Germany, Denmark, England, The Netherlands and it plans school trips all over Europe.

Here is an example of a traditional schedule of a 10th grader: 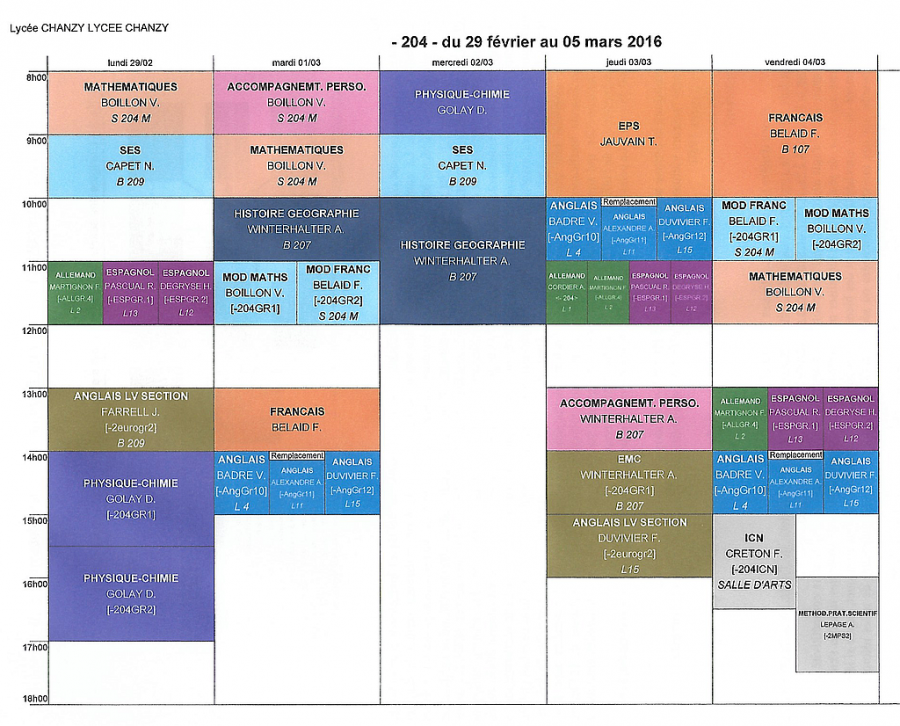 Lycée Chanzy is a modern high school named after the French General Alfred Chanzy, who came from the Ardennes. It was once imperial stables and, in 1876, after the fire of the Saint Sépulcre school, the buildings were renovated so as to accommodate the first high school of the Ardennes.
In 1914 during WW1, the school was requisitioned and it was used as an infirmary and a jail. During WW2 the high school was used to accommodate German soldiers and later, French convicts.

Description of the high school

It is located in Charleville-Mézières, on Delvincourt street, near the Petit Bois stadium and not far from the city center.
The Regional Council has undertaken major renovations since 1986 and Chanzy High School is currently considered one of the most beautiful schools in the area.
The school consists of nine buildings. When you enter the courtyard, you see the Administration office where to find the headmaster’s office in front of you. You can see the Science building on your right-hand side and the Humanities building on your left-hand side. Both buildings are situated on each side of the Administration building.
On the left is the boys’ dorm, the cafeteria, the library and the group study rooms. On the right you will see the Modern Languages building, the girls’ dorm as well as the gymnasium.

The students are drawn from the different junior high schools located in the Academy of Reims.
There are approximately 750 students who are organized into twenty-three forms. The youngest students are in the “seconde” (~ 5th form (UK), ~ 10th grade (US)), and the oldest are in the “terminale” ( ~ upper sixth form (UK), ~ senior year (US). During the last year of high school, students take an important exam, called the “baccalauréat”, which is the final evaluation encompassing all the subjects at the end of high school.

The high school provides pupils with courses in economics, science and arts.
The aim of the courses of economics and social science is to understand contemporary societies.
If you choose the science focus, you will have to choose between a specialization in biology, mathematics or physics.
If you choose the art and literature focus, you can major in visual arts, literature or languages.

The school is renowned for different elective subjects, such as drama, as well as the European section, which are optional. Choices range from the “European section”, in order to acquire a deeper mastery of the English language, to P.E., where they will practise sports such as rugby or fencing.
Moreover, students can be part of several clubs, such as the photography, the UNICEF, the cinema or the astronomy societies.
Finally, our school is very well equipped in IT, scientific and audio-visual equipment since we have a lot of computers, microscopes and so on.
From the attractive campus to all of the different options for learning, our high school is a beautiful place where all students have the opportunity to succeed.

The European Section was created in 1995 in the school. It helps students improve their English skills and gain knowledge of civilization from the Sophomore Year to the Senior Year.
It is for students who are highly motivated and who have good skills; oral expression is essential for this class.

Nowadays, there are about 190 students studying in the European section in the whole school. The students have two extra hours per week: one in English and one in History and Geography. Parts of the national curriculum in these subjects are taught in English. The grades can be taken into account for the “baccalauréat” in your last year of high school.

Chanzy worked from January 1996 to June 2001 with a British school called The Arthur Mellows Village College, located in the north of Cambridge, near Peterborough, in the south-east of England. www.arthurmellows.peterborough.sch.uk

The school was involved in the creation of a new partnership in 2002-2003 between France and the United-Kingdom, called LC-SE (www.lc-se.net), which has now become the Inter-Action Project. Groups of students worked with English students via e-mail first and then they worked by video conference with their fellow British students, thanks to the IUFM’s technical help. The partner school was a British school in the north of England, near Leeds, in Featherstone: St Wilfrid’s Catholic High School Sixth Form and Language College. http://www.st-wilfrids.bkcat.co.uk/
The other partnerships that have been created over Europe enabled work on three Comenius projects or exchanges (now Erasmus+ ): 2003-2006, 2009-2011 and 2012-2013.

The more recent partnerships are
one Dutch school since 2013, Lyceum Oudehoven in The Netherlands
one English school since 2014, Harrogate Ladies’ College in England, http://www.hlc.org.uk/
one American school since January 2014, Wakefield High School, Arlington, VA, USA https://wakefield.apsva.us/
Projects and exchanges
The school coordinated a Comenius project, “Health Matters”, from 2003 to 2006 with some of the partners mentioned above as well as Collège Arthur Rimbaud in Charleville-Mézières.

The school then coordinated a second Comenius project was entitled “Unity In Diversity” (2009-2011). It brought some students to present their work in Hildesheim, Germany, in Verona, Italy and in Hobro, Denmark.

After five years of successful exchange with Arthur Mellows Village College, Chanzy has established another exchange with the Danish high school in Hobro. There have been many class exchanges or exchanges of individual students, sometimes during the school holidays.

Some other projects are also occasionally set up for the students in the European class. For example, a trip to London and a study of Shakespeare’s work was organised in spring 2015 for the sophomores, a European workshop on Radicalism took place in Denmark in the fall of 2015 to work with German, American and Danish students. Trips to the United Kingdom or Ireland are sometimes also organised.
In addition…
The 10th graders in the European section all sit the CEC (Cambridge English Certificate) which is administered by the French Board of Education (levels A2 – B1).

Each year, the students see a play in English, presented by the Dreampark Company from London; it is performed at the school and, after the show, the students can talk with the actors, the producer and the director.

During their 3 years in the European Section the students are encouraged to participate in the different exchanges and projects so as to improve their skills in English, as well as to open up and broaden their horizons.

With many thanks to the AP students and K. Wheelock, their teacher, in Wakefield,
to the European Section students in Seconde 4, to E. Tommer, to M. Dailey,