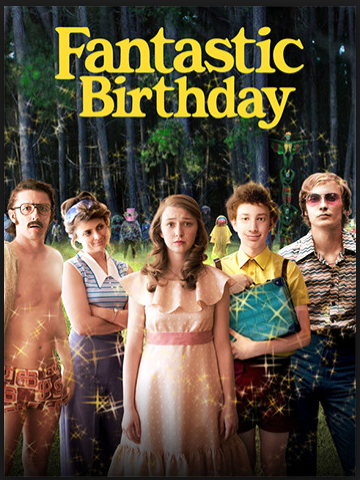 « Fantastic Birthday » reflects with fun and investiveness the dizzness oh teenagehood and the feeling of rejection that it can involve.
The universe is crazy and reminds us of fairy tales such as Alice in Wonderland. So I really liked this movie for the atmosphere like in 70’s as well as for this totally crazy family. It’s a movie which I really recommend. » Oceane 2nde 1

« The film was strange but very funny. Especially when people were dancing and Gretta’s father was really the best. Sometimes there were scenes which were boring and I didn’t totally understand the film « Fantastic birthday ». The father was a bit of a hick and this is why he was hilarious. I found the film crazy. » Anaïs 2nde1

« I found the scenery of the film strange even if the message was good. I didn’t like the fantastic aspect of the film. » Paul 2nd2

« The film was a fantastic comedy ! It talked about a girl, she didn’t want to get old. She wanted to continue to be a child. The girl, Greta was fun with Eliot. All the characters played a role in the real and the fantastic world. At the end, the girl understood that becoming a teenager was part of life. » Julia 2nde1

« Fantastis Birthday was a strange movie but a funny one ! I really enjoyed the fantastic scenes and the story which was beautiful. »  Pol 2nd2

« Fantastic Birthday is a very weird and attractive movie. It mixes Neverland and Wonderland with a dark side. Like the world of Tim Burton, some scenes were a little scary and yet we laughed a lot too. What I liked the most were the different film-making techniques that were used. Particularly the scene with the mother turned into the SnowQueen. It was not filmed but a succesion of photos added one after another. The effect made was slow and captivating. Several high angle and low angle shots were used too to emphasize the character’s moods and the fantastic landscapes. This film made me travel in an incredible world ! » Elisa 2nde1

« I likdes the movie for the fantastic moments and the funny scenes but I didn’t really understand the story about the box.  » Lily 2nde 2